The pre-Holocaust and Holocaust era immigration policies of these United States were responsible for the deaths of European Jews struggling to find safety and a sense of security under the red, white and blue banner of freedom.  Anti-Semitism, American Nazi sympathizers, the high jobless numbers and this country’s sense of isolation prevented quick action and caused countless lives lost.
Immigration policy has been a problem since World War I when the gates were closed to the Eastern Europeans.  Millions of Jews entered this country up to that time.  They/we became good, prosperous citizens, leaders and contributors to this country.  We made movies and science and legal precedents.  We made money and art and disease disappear.
So once again, immigration policy is headline news.  This time, like last time, it is overrun with stupidity, cruelty and xenophobia.  This time the illegals are brown skinned, tubercular and criminal – or not!  Neo-Nazis have once again dictated the terms of the recent policy about to become law in Arizona.
This policy is white America’s Little Big Horn.  It’s Senator McCain’s last stand!  It’s a Tea Party death rattle.
It seems that old, white men in Arizona sense the loss of their power.  And, it is so.
(Cartoons from the NY Times and Slate) 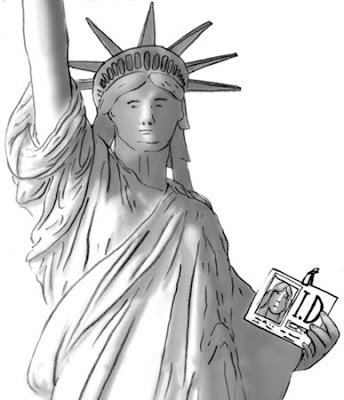 « Wanted: Out-Of-Work Talented White Men
It’s About the Birds and the Bees »